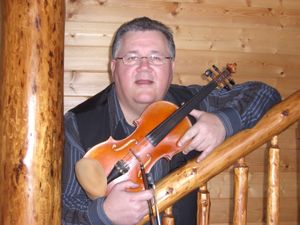 Calvin’s love for music began at an early age when he used to mimic his father Art "Lefty" Vollrath with two butter knives. His father developed his own reputation as a great fiddler and passed on the family tradition. Calvin was raised on the Don Messer’s Jubilee and at the age of 8, received his first fiddle. It was soon apparent Calvin was a natural. At 13, he entered his first fiddle contest and at the age of 17, he was already winning the Championship class. Calvin was twice crowned the Grand North American Old Tyme Fiddle Champion.

Calvin is a musical prodigy. To date, he has composed near 700 tunes, many of which have become standard contest and dance tunes across North America & Europe. His influence in the fiddle world is very evident. He has to his credit, 72 of his own albums, numerous music books of his original compositions and an instructional DVD. Calvin was commissioned to compose 5 fiddle tunes for the Vancouver Winter Olympics 2010 Opening Ceremonies to represent the various styles of fiddling our country has to offer. He also wrote the theme for the international fiddle convention "Fiddles of the World", held in Halifax NS in July 1999. When Calvin writes a tune for an individual, a place or an event, he has an uncanny sense of capturing their personality or expressing its atmosphere.

Calvin is very active in the teaching aspect of fiddle music and is touted by the Saskatchewan Cultural Exchange Society as one of the driving forces behind the revitalization of fiddle music. Calvin has taught at the Canadian Grand Masters Fiddle Camp in Ottawa since its inception in 1996. In 2007, he started his own camp in northeast Alberta, aptly named 'Camp Calvin'. He also teaches at numerous workshops throughout Canada and the United States. In August 2005, Calvin received the 'Lifetime Achievement Award' from the Canadian Grand Masters Fiddling Association, in recognition and appreciation of his outstanding contribution to Old Time Fiddling. For his contribution, support and dedicated years of promoting & playing country music, Calvin was presented with another 'Lifetime Achievement Award' from the Alberta Men of Country Music (AMOCM) in 2007 and the 'Bev Munro Award' in 2009, sponsored by the Association of Canadian Country Music Legends. In 2011, Calvin was inducted into the 'North American Fiddlers Hall of Fame' in the state of New York. In 2016, Calvin had his named dedicated to St. Paul's welcome sign on the east & west end of town.

Calvin is a world-class fiddler and represents Alberta and Canada internationally. Since his participation at the 2000 World Music Expo (WOMEX) in Berlin Germany, Calvin has toured several European countries. He also served as musical director for Hank Smith’s band on his European tour from 1994-1996. In July 2006, Calvin was selected as one of 10 performers to represent Alberta at the Smithsonian Folklife Festival in Washington DC.

Calvin has recorded with the likes of Ian Tyson, Colleen Peterson & Laura Vinson to name a few and is still in demand as a studio musician for various Canadian artists and film and television productions. Calvin has appeared on many television shows including CTV’s "Sun Country", CTV's "Number I West" and was musical director for CBC's "Native Nashville North".  CBC’s "Adrienne Clarkson Presents" aired a documentary on Métis fiddle music featuring Calvin Vollrath and John Arcand.

Calvin is a pleasure to watch on stage, his love for music is contagious and he can bring an audience to their feet. As one lady said after a Calvin Vollrath performance, “If I don’t go to heaven when I die, I’ve been there tonight” and another remarked “If you can’t dance to that, you better check your pulse”.

Calvin Vollrath is a veteran recognized for his performing, teaching, judging and composing abilities. Calvin is now producing recordings for fiddlers from across the country in his home studio in St. Paul Alberta. Calvin is a premiere fiddler who is constantly in demand.